Posted on 1 December 2015 by shona.kriss
This entry was posted in Uncategorized

Interview with a Vegan

To mark World Vegan Month 2015, we interviewed Alan Watston Featherstone, long-term Findhorn Foundation community member, founder and Executive Director of the conservation charity Trees for Life whose aim is to restore the Caledonian Forest and its unique wildlife to the Scottish Highlands. 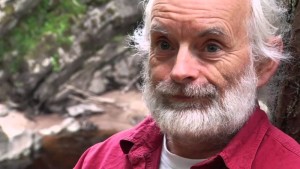 I become Vegan a long time ago. I came to live in Findhorn Community in 1978 and was Vegetarian before coming here. In April 1979, I went to a lecture in London, at the World Symposium on Humanity, where Kathleen Jannaway, Secretary of the Vegan Society, articulated all the reasons for being Vegan as all the reasons why I was Vegetarian. It became clear to me that if I was making dietary choices on that basis, being Vegetarian was only a half-way step and it was hypocritical of me to still eat animal products for the reasons that I was not eating meat. A key concern for me is the amount of land it takes to provide food for a person to live off and for animals to operate. There is about a 10% efficiency ratio in terms of how much vegetable material and protein that animals consume which is then converted into meat or milk, the other 90% is used by their own body metabolism.

During my travels I saw first-hand rainforests being cut down to create pasture areas for cattle and it became very clear to me that if I wanted to have a future with wildlife and forests, the best thing I could do was scale back the impact of my lifestyle, and changing the ecological footprint of my diet. So by becoming Vegan I have reduced my footprint by about 90%.

When I became Vegan I made further changes such as not consuming products with high carbon footprints like coffee and bananas, because they are all imported from half a world away. I am aware that biodiversity-rich areas in South America are converted into banana farms for example, forcing local people onto the steep mountain sides where they cut down forested areas, thereby causing mud slides, flooding and loss in biodiversity.

By understanding the interconnectedness of everything and knowing that my personal consumption decisions were driving the demand for certain food items in countries like Britain and other wealthy parts of the world, I decided to take responsibility for my life as I didn’t want my food choices to have such a negative effect on the world.

Being Vegan, eating organic and eating local are the ways I have found to reduce my impact. Of course, I am not 100% non impact, as I like tofu for instance and buy the occasional packet of organic cashew nuts from Brazil so I haven’t eliminated everything. But I am concerned that you are able to, for example, buy apples every day of the year and for 9 months of the year they are British, Dutch or French, but for 3 months of the year apples can be imported from as far away as Chile, Argentina and South Africa. I used to buy those because I love apples, but have stopped as I can no longer validate the energy cost of shipping as it is much more than the energy of the food content itself.

I have made many choices like this, which some people might consider a sacrifice but I see it as empowering myself, my diet is now a reflection of my values. I also grow some of my own vegetables in my small organic vegetable garden and am part of a local box scheme where I eat in line with the seasons.

We admire you, there are many people who may share your values but will not necessary taken the action to be so far in align with their values and stand in their truth. Was it a direct journey?

It was a gradual process, I wasn’t eating much meat, but after hearing the talk I decided to become Vegan. I was still eating fish for a while because I felt like I still needed some protein. I stopped that 25 years ago, because of my concerns that the oceans have become over-fished. I am strict about being vegetarian but not always about being vegan.

Sometimes I carry food if I go to a country where I know it is likely to be difficult I’ll take a jar of peanut butter or some Bombay mix. I was in Chile a while ago which has a meat-based diet, where I had cheese on a pizza, and when I got to Indian restaurants and I don’t enquire if the food is cooked with Ghee for example, I just eat it!

I listen to my body as well; I have also stopped eating bread which was a big decision as I used to be a baker for the community. I love bread, but I just felt that wheat wasn’t good for my body anymore and then I found the book “Wheat Belly” by Dr William Davis in the Phoenix which verified my decision.

Did your family or your diet growing influence your choice to become Vegan?

My family followed a conventional diet of meat, potato and two veg. I went to University in Colchester, Essex University in the early 70s and some of my friends were Vegetarian there and I wasn’t in those days. Their argument was that animals are sentient and have consciousness and intelligence and therefore we should not harm them, but my arguments back then was that plants have consciousness too, so that was my reason for not being a Vegetarian then! The planet cannot support the meat-eating habits of 7 billion people, there is a very heavy impact as it is destroying food webs all over the planet.

Have the variety and quality of products and services for Vegans improved over the years?

I would say there have been mixed results. Shops like The Phoenix and Wholefoods cater well to Vegan needs, but when travelling many restaurants still do not have enough of a variety to choose from. Still for many people, being Vegan is incomprehensible for them. The general presumption is to substitute meat with dairy or maybe eggs and in a conventional British diet, if you then remove these then you are left with potato and two veg! The British diet is extremely limited, but I have found that with the spread of multiculturalism, there are more ethnic restaurants on offer so I usually keep an eye out for Asian, Thai or Mexican restaurants, because then I know I can get Vegan alternatives.

Do you carry supplements?

I never take supplements, only occasionally for specific ailments, like probiotics and fermented foods for diarrhoea.

Have you noticed health benefits from being Vegan?

I used to get a lot of colds before becoming Vegan, now I get one cold every 2/3 years.

As we are hosting this interview for our customers, would you mind please sharing your three favourite products?

We buy almost all of our shopping from The Phoenix, we are one of your best customers! We buy good quality food, I like the smoked tofu, spring rolls, and the hummus chips. Overall, we get a range of things from lentils, rice to oil – so all of our staples. My partner is half Japanese so we also often purchase Tamari and make Tempura, Sushi and Curries.

My diet is much more varied and interesting than it would have been when I was younger, which was predictable and basic. This week for instance we had Spelt Taguetelli with Pumpkin sauce, Tempura, Curry with Dhal, Moroccan Tagine, Vegan Quiche, Vegan Pizza and Mexican food. You travel the world each night from your kitchen!

Could you perhaps share 3 tips with our customers to help empower them in their choice to become Vegan?

Do you eat cereal for breakfast?

My breakfast has changed over the years, especially now that I don’t have bread. I usually have organic oat cakes with hummus, tomatoes, a dash of Tabasco and an apple – except for 3 months of the year when they are not local.

To what extent do your Vegan practices go – do you for example eat Honey or use Leather products?

I use honey sparingly as I generally don’t eat many sweet things, and curb cravings with dried fruit rather. I do own leather belts and boots as they tend to last longer than synthetic materials which are derived from oil. My leather boots can last me 10 years, whereas I find synthetic books will last maybe half that.

I have always used my life as a template, if everyone was Vegan we would have a lot more land for wild animals to roam, and rainforests to survive. At the moment, we are still exploiting more and more of the earth land surface for our never-ending appetite for meat and dairy.

What do you think it might take for the amount of people to be living like you? Are we close in your lifetime?

Diet is a very personal and conscious choice and can’t be imposed, you will not succeed otherwise. I live in Findhorn because I believe the world is going through a transformation and awakening process and I believe in the concept of critical mass. The transcendental meditation goal is to get 1% of the population meditating to raise the vibration of planet.

Maybe we also have to aim for 1% of the world’s population eating a Vegan diet. Milk is a food produced by cows for calves at a particular time of their development and it is perfect for that function and that stage. For people who continue to keep milk as part of their diet, I question what would society think if adults stayed feeding on their mother’s milk for as long as they consume cow’s milk!

From a spiritual point of view, I believe Humanity needs to go through a process of maturation, developing a higher consciousness and embodying it on a daily basis. Findhorn is about bringing spirit into matter and making the daily experience sacred. Many people are perhaps just not ready for that, partly because of their dietary lifestyles. But small, individual choices that embody compassion are a step in the right direction.

This entry was posted in Uncategorized